Commemorate one of the most visible housing crisis to affect the city of Toronto.

Toronto, Ontario, Canada’s largest city, was also home to its own "Tent City" until September 2002, when the residents of Tent City were evicted by the owner of the property, Home Depot. It was situated in the downtown core of Toronto, near the waterfront, and was home to hundreds of people who were homeless.

Tent City was mainly self-governed, as police would not usually enter it unless a major crime was committed. One of the oldest residents of Tent City became the appointed "Mayor Karl Schmidt" and oversaw the operation of the city and helped deal with the crime that did occur. In one instance a resident who was leaving Tent City sold his shelter twice to two separate individuals, making a profit for himself and leaving the buyers to resolve the dispute. There were also citizens who turned to theft in order to make money. Despite these conditions, there were some residents who felt more secure in Tent City than they did in the government shelters and chose to live in a self-regulated area where they could defend themselves. 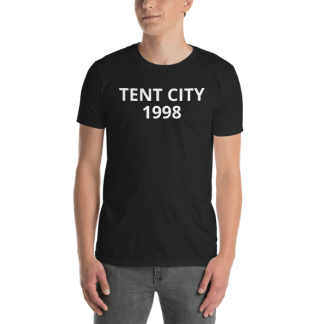